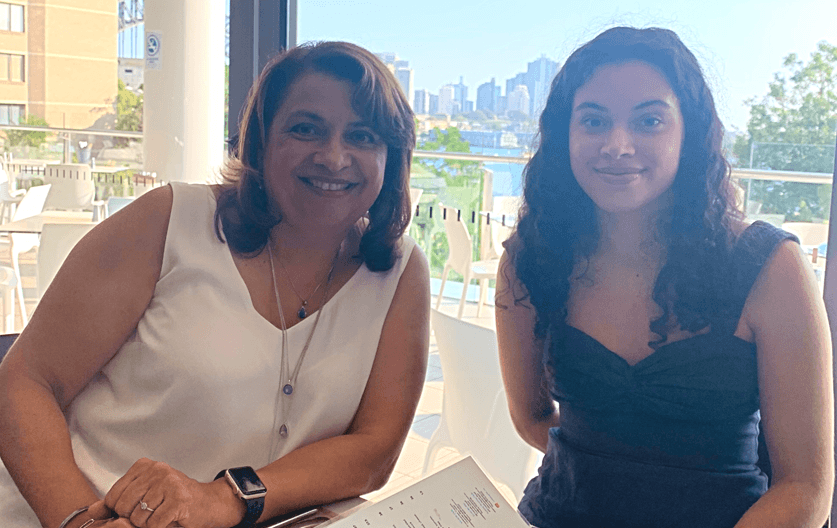 Mum Olga with her daughter Amber

Olga G approached Best Doctors when her middle daughter Amber was given a diagnosis of chronic fatigue syndrome.

The symptoms crept up gradually. At the time, Olga’s twenty-one-year-old daughter was studying full-time at university. She was enjoying her course in music production, had a part-time job and was a regular at the gym. Then her energy levels began to drop.

‘The symptoms built up gradually, so we weren’t worried at first,’ recalls Olga.

Blood tests revealed nothing major, apart from a slight drop in Amber’s iron levels, so her GP recommended a course of iron supplements. Two months later Amber was still struggling. She quit her part-time job and stopped going to the gym, trying to direct what little energy she had left into her studies.

Christmas came and went, and by January, Olga knew there was something very wrong.

‘Amber was on holiday from uni. She’d given up her job and she wasn’t going to the gym. She was eating well, taking iron tablets and resting, but she still felt overwhelmed by tiredness. She just couldn’t do anything.’

The GP diagnosed chronic fatigue syndrome, a complicated condition with no simple cure.

Olga can’t remember any set treatment regime being recommended. ‘The GP said try this, try that. It might work, it might not. She also recommended Amber see a psychologist. It all felt a bit nebulous.’

‘It wasn’t that I didn’t believe Amber’s GP, it’s just that she seemed quite young. For my own peace of mind, I wanted to be sure there was nothing the GP had missed, and I wanted to know we were getting Amber the best treatment.’

Amber herself had some concerns. ‘She was worried her doctor might think we didn’t believe her, but I was sure she wouldn’t mind. The doctor gets sent a copy of the Best Doctors report, so it helps her as well.’

It took a few weeks to get all of Amber’s medical records, including blood tests and a report from the psychologist she was seeing, all of which were sent to Best Doctors.

The comprehensive report that came back confirmed the GP’s diagnosis.

‘It was such a weight off my mind,’ says Olga. The report also contained a wealth of information and suggested treatment plans that both Olga and her daughter found invaluable.

‘It was so helpful to have links to information to read up on, research to show what works and suggestions that other people who suffer from chronic fatigue syndrome have found helpful.’

The report confirmed there was no quick fix.

Amber quit her studies and spent several months gradually recovering her strength and energy. Now, twelve months later, she’s back at uni and enjoying life again. The next step will be to gradually reintroduce physical activities like yoga into her schedule.

‘It’s such a turnaround from this time last year,’ says a very relieved Olga.

And would she recommend Best Doctors?

‘Absolutely. How else can a non-medical person find professionals to review a case? It was so good that someone with expertise could look at the data with fresh eyes and review Amber’s case. Best Doctors is such a good idea.’

Our health and wellbeing programs can help you live your healthiest, happiest life.