Is it ever safe to eat food with mould on it? 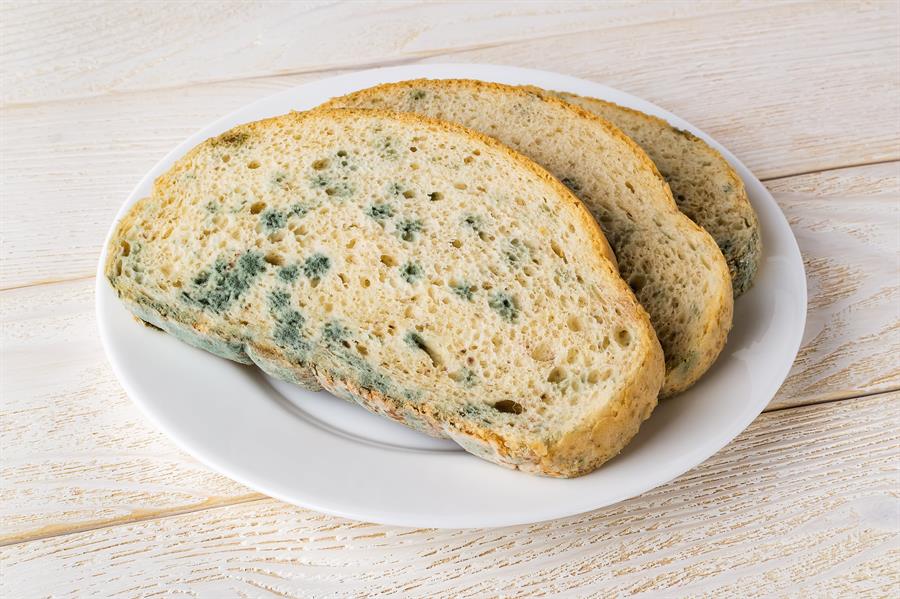 Is it ever okay to cut off the mouldy part of a piece of cheese or bread and eat the rest? The answer isn’t a straightforward yes or no, according to Dr Ailsa Hocking of CSIRO Agriculture and Food, it depends on the food.

Moulds are fungi and they’re related to mushrooms and yeast. They occur almost everywhere, inside and out. In the home, mould thrives where there is moisture and poor ventilation.

Unlike other plants, moulds can't make their own food but break food down into smaller molecules they can digest. In this way, they play an important part in nature, breaking down waste.

A microscopic, single celled organism, mould only becomes visible to the human eye when it starts growing on food and water by multiplying to form a matrix.

This matrix is the furry green and white growth you see on bread, cheese and other foods. Toxins are released into the affected food and can extend beyond the visible matrix, or the ‘mouldy part’. Known as mycotoxins, these can be dangerous.

What happens if we eat mouldy food?

According to the World Health Organisation, the adverse effects of mycotoxins from mould range from acute poisoning to long-term effects like immune deficiency and even cancer.

For example, patulin is the mycotoxin that is commonly found in rotting apples. If you ingest it, the effects can include vomiting, gastrointestinal disturbances and nausea.

Other types of moulds can cause allergic reactions and respiratory problems. In most healthy individuals, our immune systems can deal with small amounts of these toxins without causing us harm. The risk is not  knowing how much you have consumed.

If you see mould on foods such as hard cheeses, salami and hard vegetables like carrots and cabbage, you can still eat them if you remove the mouldy part.

It’s a good idea to not only cut off the mouldy part but to also cut off at least one to two centimetres around and below the mould spot. Take care to keep the knife out of the actual mould spot so it doesn’t contaminate other foods.

What’s not safe to eat?

If you see mould on foods with high moisture content such as casseroles, cooked grains and pastas, soft fruits, vegetables, sauces and soft cheeses, you should throw them out.

If you see mould on porous foods  such as bread, cakes and pastries, you should also throw them out as they could be holding dangerous mycotoxins.

How can you reduce your risk?

Keep your kitchen clean to keep mould in check.

Cleanliness is vital to reduce the spread of moulds. Mould spores from affected food can build up in your refrigerator, dishcloths, and other cleaning utensils.

The most important actions you can take to prevent the growth of mould in your home are those that minimise moisture.

Protecting your food from mould

Here are some tips for protecting your food from mould:

The World Health Organisation recommends these tips to reduce your risk of ingesting mycotoxins from mould in food.

Always select grains and nuts as fresh as possible.

Take particular care with the following foods and throw them out if you see any signs of mould, discolouration or shrivelling:

Where to get more information

You can find out more about moulds on foods at the United States Department of Agriculture website or CSIRO.