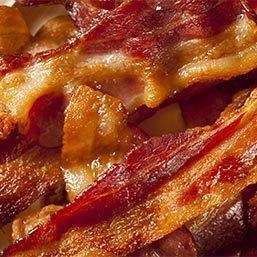 In 2015 the World Health Organisation declared that processed meats cause cancer. Processed meats include bacon, ham, sausages and salami.

According to the WHO, processed meat is classed as a group 1 carcinogen, which means it’s known to cause cancer. Red meat, by comparison, is a group 2 carcinogen, which means it probably causes cancer. The WHO report estimated that each 50-gram increase in daily intake of processed meat raised the risk of contracting colorectal cancer by 18 percent.

A large-scale study in the UK found processed meat could also increase the risk of breast cancer in older women. More than nine grams a day – that’s typically less than a single rasher of bacon – increased the risk of developing breast cancer by 21 percent.

What is processed meat?

Processed meat is any meat that has been treated. Meat gets treated to either preserve it or to change the taste. It can be cured, salted, smoked or fermented. Processed meats include ham, bacon, salami, prosciutto and sausages.

What’s the problem with processed meat?

Nitrates are often used to keep meat fresher for longer. These produce N-nitroso chemicals when your body digests the food. N-nitroso chemicals can damage the cells that line the bowel, which in turn can lead to bowel cancer. There’s also a chemical in red meat known as haem, which has the same effect.

How much processed meat is safe to eat?

The Australian Dietary Guidelines exclude bacon and processed meat from their recommended foods. They refer to such foods as ‘discretionary’ foods only to be consumed occasionally.

A study from the UK that looked at whether people who ate an average of 76 grams of processed and red meat a day – that equates to around 3 slices of ham – were still at increased risk of bowel cancer found a 20 percent increased risk of colorectal cancer. So, even relatively small daily amounts of red and processed meat increase the cancer risk.