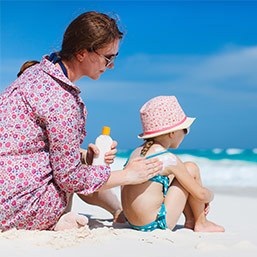 Slip on a T-shirt, slop on some sunscreen, and slap on a hat. “Slip, slop, slap” has been the catchphrase of every Australian summer since the Sunsmart campaign was launched in 1981. Back then, melanoma rates were rising and the link between ultraviolet radiation and skin cancer was becoming clear.  Today, Sunsmart remains one of Australia’s most successful health campaigns. Australians have become so conscious of the sun’s harmful effects that Vitamin D deficiency has re-emerged as a significant health issue in Australian infants.

Ultraviolet light is a major cause of skin cancer, but it is also the best source of vitamin D. Vitamin D is an essential nutrient for keeping bones strong, boosting immunity, keeping depression away, and lowering internal cancer risks.

In  2011, a Swedish medical journal published a paper identifying nine factors that affect Vitamin D levels. They included the latitude of where you live, air pollution, sunscreen, skin colour, skin temperature, body fat, age, and the health of your gut, liver and kidneys. Latitude and air pollution aren’t risk factors for vitamin D deficiency in Australia, so the attention has turned to sunscreen use.

Weighing up the benefits of vitamin D against the risk of skin cancer shouldn’t be a question you have to ask every time you go outside, so scientists have been keen to test whether sunscreen use limits vitamin D absorption. 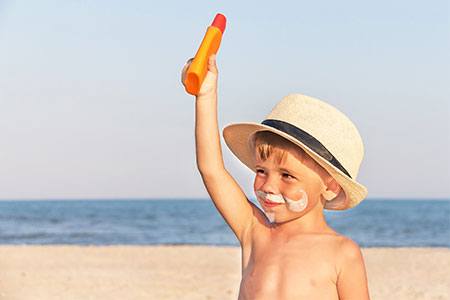 Vitamin D is a fat-soluble vitamin that is found in very few foods. Sometimes it is added to foods and it can be taken as a supplement, but the easiest way to get your daily intake of Vitamin D is by going outdoors. Your body manufactures vitamin D in a three-step process.

When rays in the invisible ultraviolet light are absorbed into the skin, they stimulate skin cells to produce vitamin D precursors. The liver converts these precursors to calcidiol, which the kidneys convert into a bio-available vitamin that the body can use.

In theory, since sunscreens prevent sunburn by blocking UVB light, you’d expect that they’d also lower Vitamin D levels. However, a well-cited Australian study found that most people don’t use enough sunscreen to block all UVB light, so sunscreen use doesn't block their Vitamin D production. The study showed no difference in vitamin D levels between groups applying a sunscreen and those applying a placebo cream.

Like most studies in this area, the researchers didn’t monitor how much sunscreen was used, or how real sunlight the participants were exposed to. Since most people don’t apply enough sunscreen to block all UV light, the question of whether sunscreen hampered vitamin D production remained unanswered.

While the Australian study reminds us to be more vigilant about how we slop on the sunscreen, a more stringent study from King’s College London’s Institute of Dermatology can give us more confidence that sunscreen use won't put us at risk of a vitamin D deficiency. The study sent two groups of research participants down to a Spanish island for a week and monitored their Vitamin D production. Half the group wore sunscreen with a skin protection factor of 15, while the other half wore no sunscreen. Researchers found that the level of Vitamin D production rose significantly regardless of whether the participants were wearing sunscreen or not. Though the sunscreen group’s levels of Vitamin D were slightly lower, this group were also protected from the damaging effects of sunburn. Overall, the benefits of wearing sunscreen outweighed the small difference in Vitamin D production.

For most people, 10 to 15 minutes of sunlight every day is enough to maintain a healthy supply of vitamin D. Wearing a sunscreen will protect you from sunburn and help protect you from skin cancer, and it won’t stop your body from producing a healthy amount of vitamin D. So slip on a shirt, slap on a hat, and don’t just slop but cover yourself in sunscreen with confidence.