On September 11th, Australia will celebrate R U OK? Day, an annual day of action to promote mental wellbeing. The idea behind this day is to encourage open and honest conversations, and to prevent small problems from spiralling into big ones.

Someone who has dedicated their life to this issue and to the concept behind R U Ok? Day is United States academic Dr Thomas Joiner. Since his father took his own life, Dr Joiner has dedicated his life to researching “why?” The answer he believes is that two key forces are at play:

Dr Joiner believes that these two forces are commonly at the root of why people feel they have no option but to end their life. However, by connecting with them over the question R U OK? we can help people who are struggling to feel connected long before they progress to thinking about suicide.

To decrease these numbers, mental health strategies such as R U OK? Day are essential. R U OK? Day encourages meaningful conversation. And a conversation like this could change a life.

What you can do to get involved

In the time it takes to share a cup of coffee, you can have a conversation that could make a significant difference to the way a person is feeling. People need to feel socially connected to friends, family, colleagues and schoolmates, and the best way to do this is to start by asking the question ‘Are you OK?’ These three simple words help you show compassion, provide a listening ear, improve mental health and strengthen community connections. 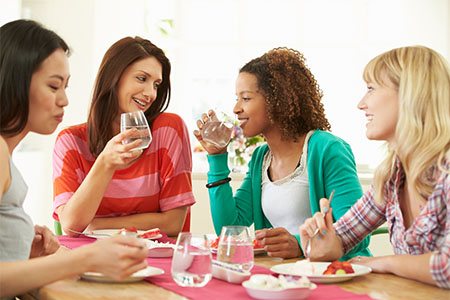 As well as simply asking the question, there are many ways to get involved with the R U OK? Day, and help to raise awareness or gather funds* to support this crucial not-for-profit organisation. Event and awareness ideas include:

Organise a casual clothes day with a yellow or orange theme.

Arrange a team building exercise, such as sport or dancing.

Allocate time to call a friend and ask the question ‘Are you OK?’

Host a sausage sizzle and invite people walking by to join.

Arrange a photo shoot in which people gather to form R U OK? before being snapped from overhead. Share your photos with hello@ruokday.com.au.

Invite a mental health professional to speak at your work or school.

Gather people together to watch the R U OK? video or presentation slide.

Encourage staff to send an in-house email asking ‘Are you OK?’

Download the R U OK? poster and hang in the staff room or classroom.

Encourage everyone to wear a R U OK? lapel pin.

Order a box of 250 R U OK? teabags and encourage people to share a cuppa with the person next to them.

Stick an R U OK?, Mate? bumper sticker on your car to encourage cars behind to start a conversation.

Organise a bowls day at your local bowling club.

Have a dinner party with friends. 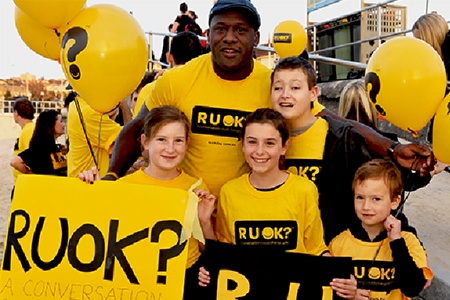 Sometimes helping someone is as simple as asking the question, so spread the word and make sure you ask the people you know – ‘Are you OK?’

*Make sure that you speak to the organisers of R U OK? Day before implementing any of these events, as there are some charity regulations you will need to follow.