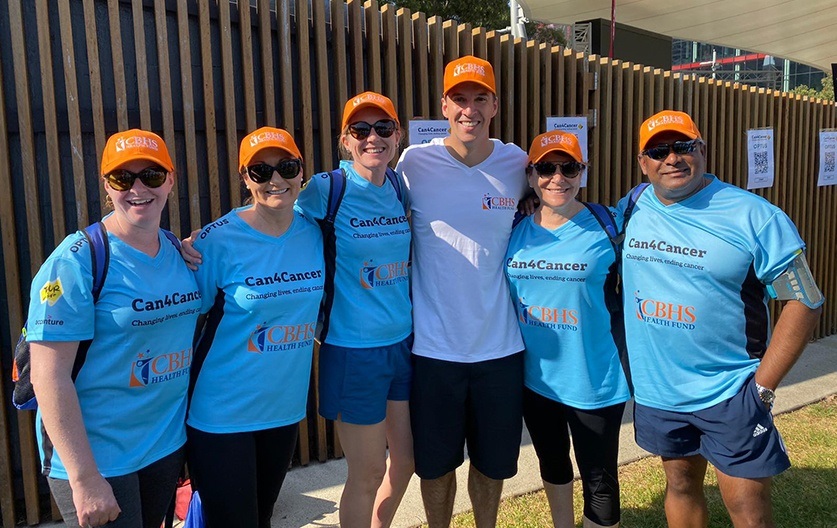 Can4Cancer? Yes, we definitely can!

Seventy-two million. That’s how many steps we estimate the participants took in Sydney’s Can4Cancer walk this year. Our team of walkers from CBHS contributed well over a million steps to that total.

Sydney’s Can4Cancer event on Tuesday 29 October was the final of five walks in 2019, topping off a massive fundraising effort that so far this year has raised over $2.6 million for cancer research.

A record 2,500 walkers took part in the Sydney event, with many hundreds also taking on walks in Adelaide, Brisbane, Hobart, Melbourne and Perth.

It was a typical Spring day for the Sydney walk, with cloudless skies and a forecast top of 26 degrees. Early morning arrivals in Darling Harbour were soon peeling off the layers, as our CBHS volunteers offered sunscreen and Gatorade. We also handed out 2,000 muesli bars and 300 crunchy apples while the walkers readied themselves to start.

Olympic swimmer and CBHS ambassador Matt Welsh took to the stage to be interviewed by TV presenter James Tobin. Matt was spreading the message of why health and happiness is important at any stage of life. 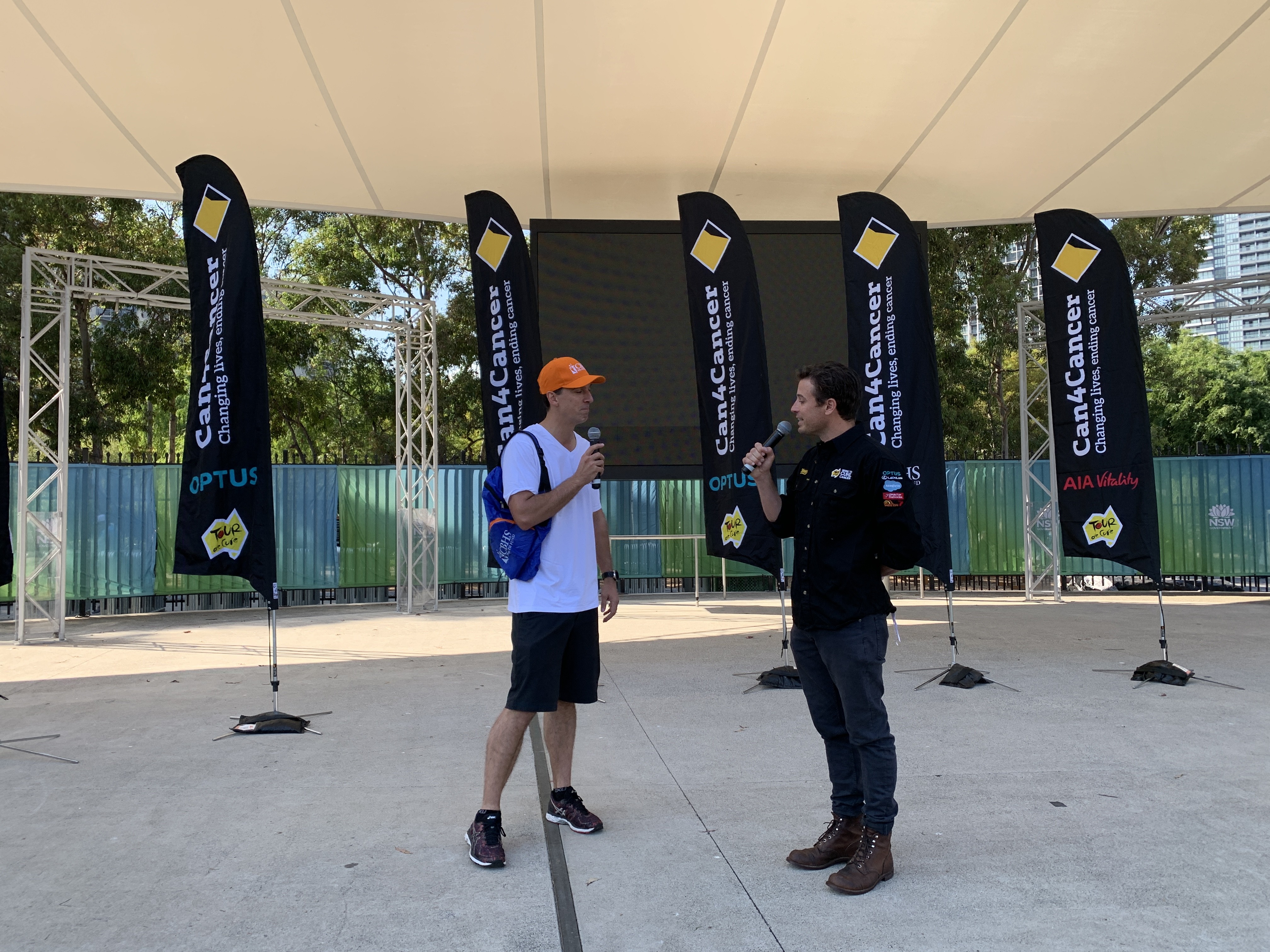 Then the warm-up started, anticipation built as the countdown began…and they were off!

Waves of walkers were suddenly pouring through Darling Harbour. With so many participants it took over an hour to get everyone away safely. Before long the orange caps that identified walkers from Team CBHS were bobbing in a sea of blue as people streamed across Sydney’s iconic Anzac Bridge.

Energy and enthusiasm stayed high as walkers crossed the narrow streets lined with traditional weatherboard cottages in the historic waterfront suburbs of Balmain and Birchgrove. There was plenty of shade to be found in the parks, and history too. Did you know the first professional game of rugby league was played at Birchgrove Oval in 1908?

Another long waterfront section took walkers through the historic landmark of Callan Park, before they turned for home at the 14 kilometre mark. Heads down, legs strong, they powered through Lilyfield, heading for what many people agreed later was the highlight of the afternoon. With another five kilometres still to go – and some people flagging – walkers were met by smiling volunteers from CBHS, cheering them on as they handed out ice blocks. 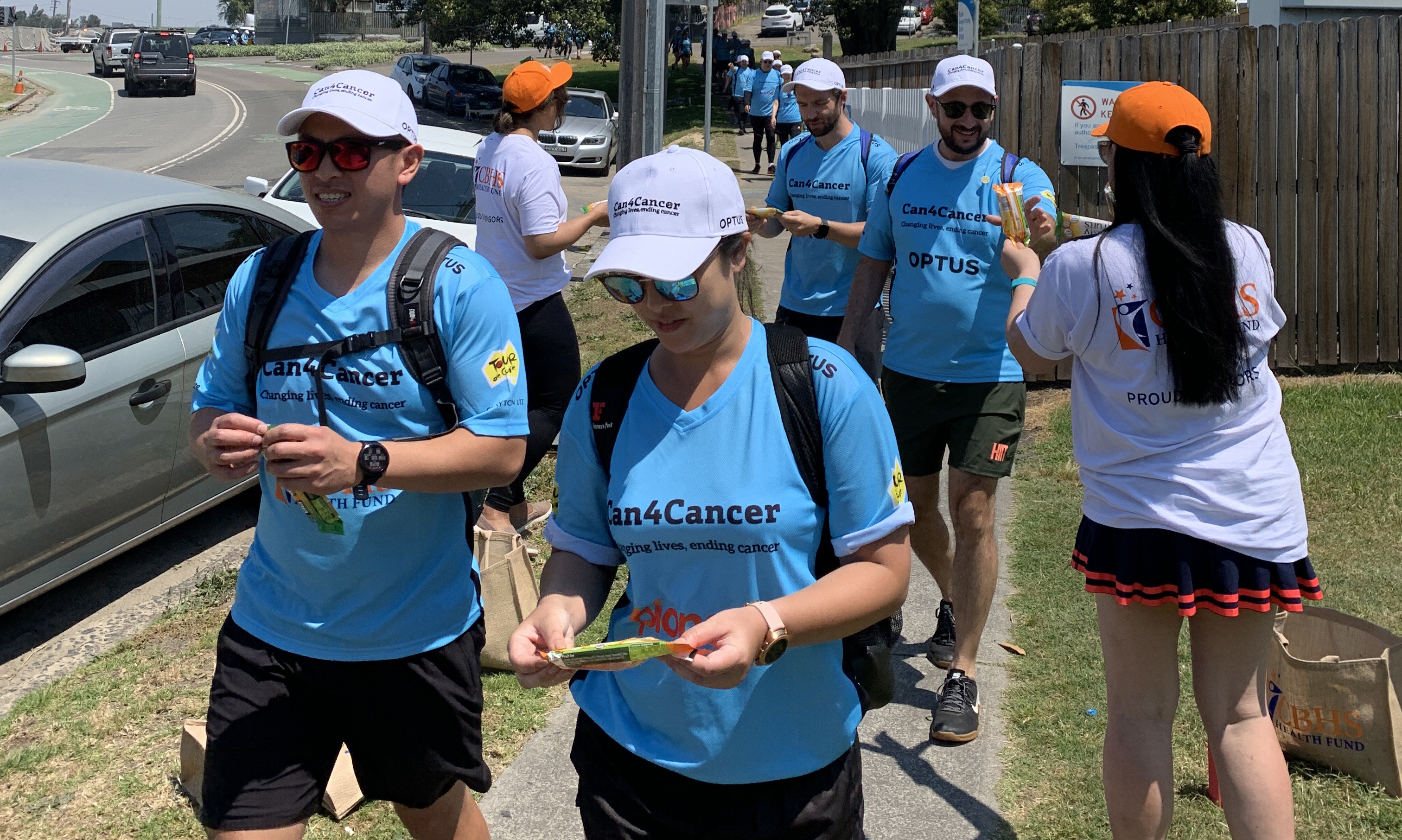 The return leg over Anzac Bridge brought a welcome breeze off the water and the flags on Darling Harbour were fluttering as walkers completed the final kilometre.

Tumbalong Park was the final destination, where ten CBHS massage therapists were waiting to soothe sore muscles. The finish zone was soon crammed with blue-shirted walkers, some nursing blisters and sore feet, most downing a cold drink and all thrilled to have taken part in such an epic adventure.

The day finished with the arrival of around 200 Can4Cancer cyclists, including CBHS Group’s Dario Molina and our CBHS volunteer physio Aaron. All were keen to reunite with their friends, colleagues and family, after three-day 400km journey. 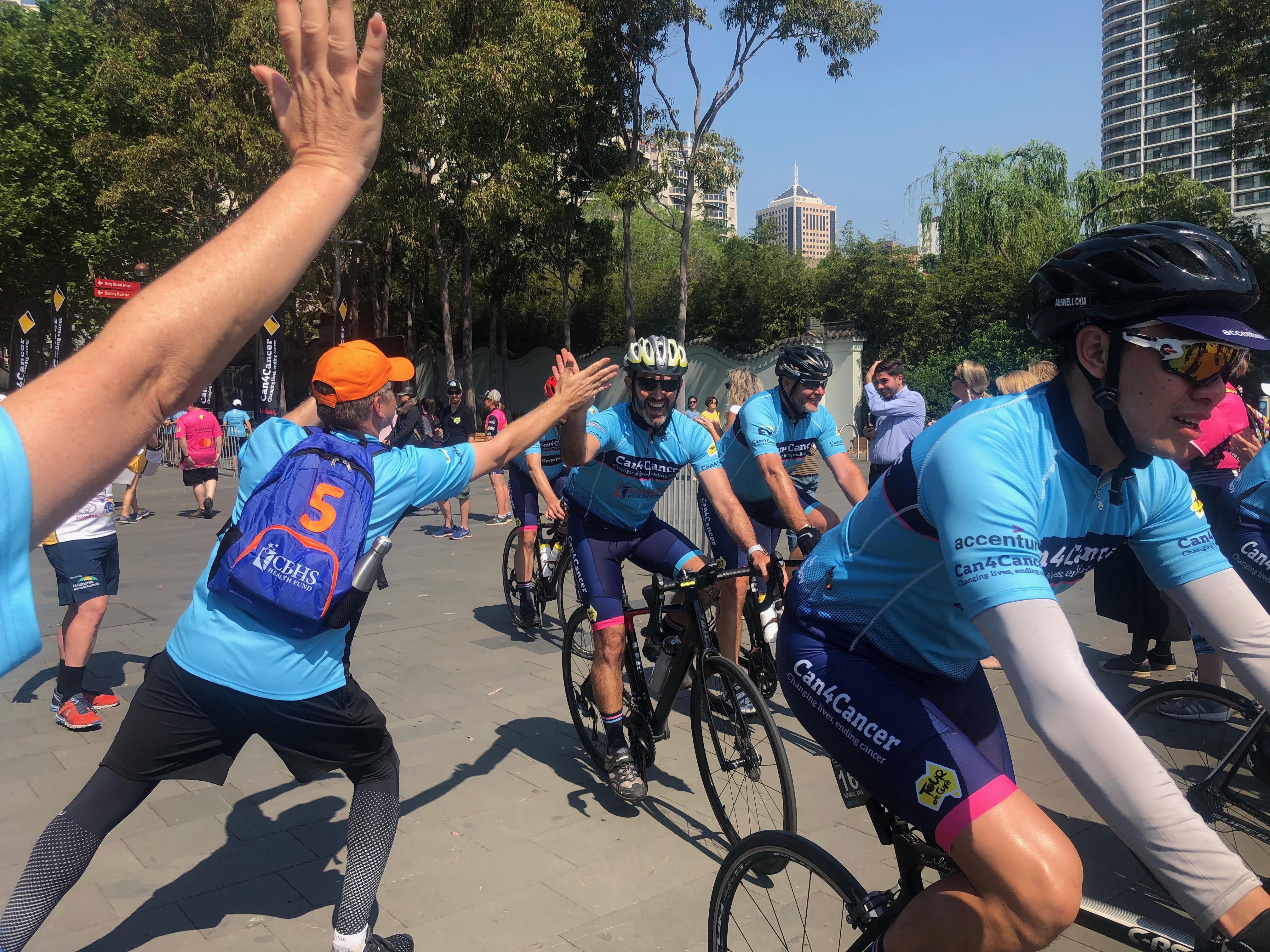 So how did we do? Well, from Team CBHS, Stephen battled blisters, Nicola walked the entire course with a broken toe and Julie survived an attack from a pull-up banner, but like all the walkers and volunteers from CBHS they stayed the course. They made it!

Thanks to a massive fundraising effort, our CBHS walkers alone raised a mighty $21,800. Clever add-ons like $5 for each high five with our executive team on the walk itself added another $3,750, which CBHS is generously rounding up to $5,000. Add to that our internal staff fundraising, which is matched dollar for dollar by CBHS, and our fundraising total now stands at more than $40,000.

Thank you to all our wonderful members, suppliers and staff who helped us get there.